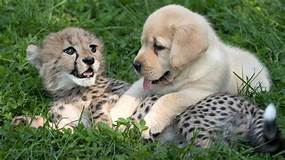 No matter who we are, we want to feel like we can count on our mother. However, the situation for this cheetah cub was different.

Kris is the single surviving cheetah cub born from the first-time cheetah mom named Neena. The cub was born at the breeding facility in the Cincinnati Zoo & Botanical Garden.

According to Andie Haugen, who works at the Cincinnati Zoo’s Cat Ambassador Program, cheetah moms usually abandon their offspring when only one or two of them survive. They would even stop their milk production.

Abandoning one or two cubs allows them to be ready for breeding sooner. It is hoped that they will have a larger number of offspring that will survive the next breeding.

The zookeepers can provide Kris with medical and nutritional needs. However, they are not fit to become a role model for Kris, who will show her how the world works.

Fortunately, a rescue dog named Remus arrived at the perfect time to be Kris’ new best friend. Remus is a mixed-breed dog from the Animal Rescue Fund, located in Amelia, Ohio.

Furthermore, what makes Remus perfect for Kris is his personality. He is friendly, sweet, and lively. Reus loves to play with both people and other animals.

Andie stated that Remus’ main task is to be a friend to Kris and play with her. Most importantly, he serves as Kris’ surrogate sibling. Remus will be her companion in her journey of growing up.

It needs to be said that it was not love at first sight. After all, we are talking about a cat and a dog here.  Their relationship was not instantaneously a positive one, at least on Kris’ side. It took some time before she was comfortable with Remus.

Andie shared that they introduced Kris and Remus gradually. After a few weeks, they started spending more time with each other and began to play around. During the process, they became comfortable with one another’s’ personalities.

Now, they are inseparable and are the best of friends, playing all the time. Remus will keep Kris company until she is prepared up to become a zoo ambassador. Then, her role will be to educate zoo visitors about cheetahs.

The Cincinnati Zoo & Botanical Garden is doing their best to increase the cheetah population, which underwent a rapid decline in 1900. Their population dropped from 100,000 to the current number now being between 9,000 to 12,000.

Here is another story about a dog making friends with a natural enemy. https://excellentdogsclub.com/runaway-dog-was-playing-with-deer/

Here is another story about a Cheetah and a dog becoming friends. https://www.nationalgeographic.com/animals/article/151007-cheetahs-dogs-animals-science-zoos

Source: The Cincinnati Zoo and Botanical Garden via YouTube