Home Excellent Dogs Club Have You Ever Been Betrayed By A Kiss?

Have you ever been betrayed by a kiss from the one who loves you the most? Did they even realize that they were putting you directly into harm’s way?

And just who would that individual be? Is it the one who is most excited to see you upon your return from work at the end of the day? Who is the first to give you welcome home kisses?

“My Dog Has Never Betrayed Me With A Kiss!”

I imagine that you quickly denied that such a thing would ever happen with your dog! You would never believe that your fur baby would ever deliberately do anything to harm you, right?

Keep in mind that I did NOT say that it was a deliberate attempt to harm you! However, this does not preclude the possibility of you being harmed by a loving, slopping kiss from your dog.

Rarely would any of our family dogs actually truly try to hurt us in any way. Of course, there are times when the strongly held self-preservation reflex kicks in.

One example of this is as follows. The sweetest dog I have ever known had a newborn litter of puppies one hot summer. Due to the heat and her hormones, she also had a “hot spot” very near her collar.

This common skin lesion was quite painful if irritated. On this occasion, someone grabbed the collar to move the dog so she could get to the puppies.

The pain of the collar harshly pulling on the already painful hot spot caused the poor dog to snap out toward the pain.

She was clearly NOT trying to bite anyone! However, one of her teeth caught on someone’s tooth as she moved her head away from the pain.

THIS IS NOT THE KIND OF HARM WE ARE

I doubt there is anyone who doesn’t know how eagerly our dogs greet us with tail wags and sloppy kisses when we return home.

Unfortunately. our dogs may be giving us more than we bargained for with those loving kisses. That canine slobber may also hold some very nasty bacteria that can seriously harm us.

One study from the Royal Veterinary College and the University of Lisbon dealt with this topic extensively. Apparently, some of the things we share with our dogs can be picked up in the following ways.

I doubt that any of this is new to you. So, what is new that we need to know about to protect ourselves from potentially harmful dog kisses? 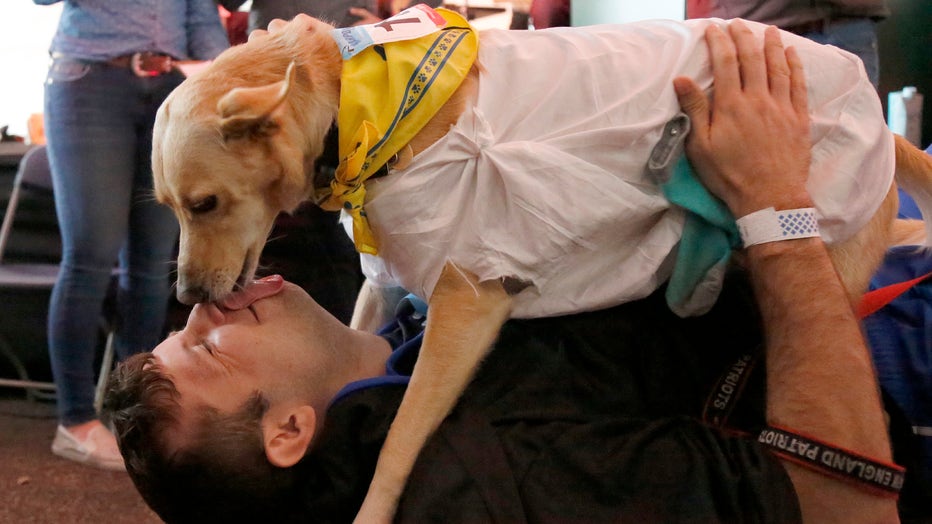 The real concern in this situation is that several bacterial strains carried by dogs are resistant to antibiotics. They are also very harmful to humans.

Approximately half of the dogs tested by the researchers carried strains of bacteria that were antibiotic-resistant. One of the most common of these infections is E. Coli.

This fact is of great concern to Urgent Care Specialist, Dr. Nathan Newman, the Medical Director of UrgentMED. He explained that specific types of these infections are often deadly to human beings.

Quoting Dr. Newman, we were told: “I get that it’s hard not to accept those love licks….But think about that tongue licking, where the dog goes to the bathroom before it kisses you”.

Many of us grew up learning that no one loves us as much as our dog loves us! Their love is unconditional and ever-lasting, right?
Whether we are just checking the mail or are away for a summer vacation they will be just as excited to see us when we return home. They will greet us effusively with tail wags and sloppy kisses!

We are encouraged to believe that there is no harm in accepting canine kisses on the face and mouth. I have actually heard people say that a dog’s mouth is cleaner than a human’s mouth!!

What else have we been told about being betrayed with a kiss from our beloved dogs?

There’s no harm in letting your pup lick your mouth and face or even giving him smooches in return, right? After all, they say a dog’s mouth is cleaner than a human’s. Have you been told that as well?

Did you really believe this claim? This is clearly NOT the truth! Studies have shown that dog saliva may possibly possess a very slight degree of antibacterial components,

The very minimal amount of antibacterial properties may be able to help heal a dog’s personal wounds. It may also help them to clean their newborn pups.

However, more importantly, the studies clearly demonstrated that numerous diseases can be shared by your dogs. Some of these illnesses can be life-threatening as well.

Discussed briefly below are three of the nastiest bacterial infections that your dog’s kisses may transfer to you. It is for you to be the judge as to what illness you are willing to risk or not.

This is one of the top five illnesses on our list of those transmitted by a dog’s kisses. Believe it or not, Brucellosis is actually a venereal disease for dogs. Because it is a zoonotic bacterial illness it can be transferred from dogs to humans.

This disease is most commonly transferred from dogs to humans during the whelping process. Humans assisting an infected dog to deliver pups may become infected with Brucellosis.

It is also possible for humans to catch Brucellosis via an open wound or cut when the site is exposed to a dog with the illness. If you wish to know more about Brucellosis, you may wish to check out this information. https://healthypets.mercola.com/sites/healthypets/archive/2014/06/09/brucellosis.aspx

Campylobacteriosis Can Easily Betray You With A Kiss

You may have already heard about Campylobacteria. This bacterial infection can cause very painful gastrointestinal problems. You may be surprised to learn that the dog may or may not be experiencing signs or symptoms themselves.

You can catch it from them anyway! Dogs only have to be at least a “carrier” of Campylobacteria to share it with you via their sloppy kisses.

This particular bacteria is most often associated with dog bites. However, this bacteria can also be transferred via a dog’s kisses.  It is commonly found in the canine mouth and has a bad reputation for causing humans to become ill when exposed via kisses or a bite.

Recently, an elderly English woman was in the news when she was found to be extremely ill due to this bacteria making her quite ill. She nearly died when she was licked by a dog carrying this disease.

If you want to read more about this potentially deadly disease go here. https://www.cbsnews.com/news/womans-pet-dog-gave-her-life-threatening-infection/?ftag=CNM-00-10aab6a&linkId=26104845

Leptospirosis Is Yet Another Way To Become Betrayed By A Kiss

You may or may not have heard about his particular disease before. Because it is zoonotic, this illness can cause quite a variety of symptoms that are potentially fatal in both dogs and humans. It can be fatal for either species.

The humans most susceptible to this illness are children. All humans may suffer anywhere from mild to severe disease and can die also from it.

Some of the kinds of dogs that are more at risk for having canine leptospirosis include:

Here is a link to learn more about Leptospirosis. https://www.petmd.com/dog/conditions/infectious-parasitic/c_multi_leptospirosis

When you hear Salmonellosis you most likely think of poultry, eggs, or meat, right? Were you aware of the risk of getting it from your dog?

This nasty bacterial infection is easy to be passed on from dogs to people. Both species can have fever, vomiting, and diarrhea as well as other signs and symptoms. If you want to know more about this illness, go here. https://www.petmd.com/dog/conditions/digestive/c_dg_salmonellosi

This bacterial infection can cause a number of potentially fatal symptoms in dogs, and since it is zoonotic, people can catch it from them as well. Children are especially vulnerable to the disease, which can range from mild to severe in humans.

In Conclusion, To Avoid Being Betrayed By A Kiss, Keep This In Mind

Photos from Pixabay or my personal album unless otherwise specified.