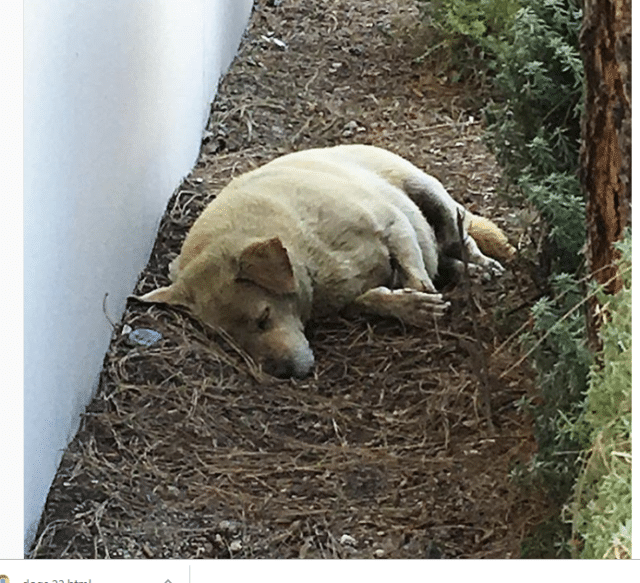 Why do owners leave their pets behind? Isn’t it reckless and cruel for people to leave their loving pets all alone and confused on the dirty streets? This dog was starved and lived in dirt.

He had settled down in a parking lot across from his former home. Maybe he was keeping watch, in hope that his family would return for him.

No animal will be more thankful and appreciative of their new owner than one who has been rescued.  Compared to the cruel person who mistreated and/or abandoned them, it doesn’t take much to shine.

That is especially true for Larry, the dog that was starved and lived in the dirt. Anyone who gives him food and shelter will be adored.

Being treated kindly and with love would be an extra bonus for Larry. To learn more about Larry, check out this Instagram.

Poor Larry the Lab, The Dog That Was Starved and Lived In the Dirt

Sadly, being abandoned is what happened to an eight-year-old Labrador Retriever. The discarded dog lived in a parking lot that was located outside a warehouse.

Thankfully,  a caring truck driver found him lying in the dirt of this lot. Feeling bad that the dog was starved and lived in dirt, the driver was determined to find the dog a nice home.

Furthermore, he couldn’t adopt him since he was always on the road driving a truck. According to Dodo, the dog was left behind after his family, which used to live across the street, moved out.

Can you imagine just loading up your moving van and driving away? Could you simply leave the loving pet who shared your home until the moment you abandoned them?

How Did Larry Feel When He Realized He Had Been Left Behind?

What do you think was going through the poor dog’s mind? What was the owner thinking when he so callously left him behind without food, water or shelter?

Was there a child in the family who cried as they drove away, begging his daddy not to leave his beloved companion? 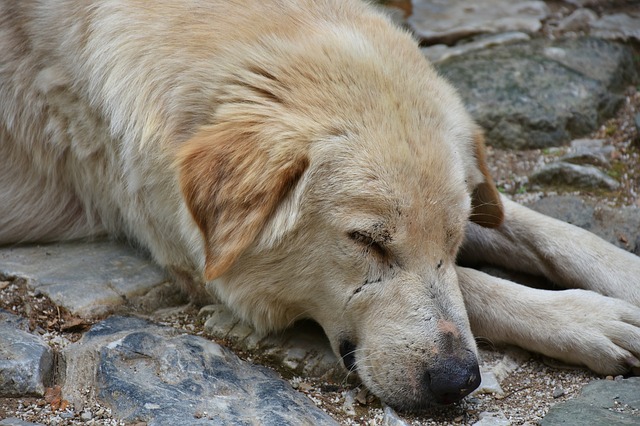 Hoping to find the dog a place to stay, the driver posted Larry’s photo on Instagram. Soon after, they took Larry to a Los Angeles based rescue group.

Sadly, the poor dog had spent months on the streets while eating nothing but scraps. However, both the driver and the rescue group believed everything was going to change for Larry.

They Rescued Larry And Now He Needs A New Home

Thereafter, the Love Leo Rescue group shared the dog’s photo with a short description of his condition. They made it clear that all Larry needed was a forever home.

Although he is suffering from Cushing’s disease, this can easily be managed by daily medication. Cushing’s disease causes the dog’s body to trigger excessive production of the hormone cortisol.

This leads to various problems. These problems include a change in skin appearance, hair loss, frequent urination, abnormal swelling, and thirst.

Larry’s medication will cost about $180 a month, throughout his life. Already, the rescue organization spent about $4000 on Larry’s initial and urgent medical care.

IS THERE A GO FUND ME PAGE FOR DOGS NEEDING MEDICATION TO SURVIVE?

It costs a lot to own a dog under the best of circumstances. When a dog has special medical needs, it can be financially challenging for most people. https://happymutt.org/can-you-afford-to-own-a-dog/

We hope Larry finds a kind and loving soul that will offer him a forever home. Would you like to adopt Larry or do you know some who may adopt him?

Reach out to Love Leo Rescue today at loveleorescue@gmail.com

Larry, we wish you the best!

Larry is not the only deserving dog in need of a forever home. There are many rescue shelters seeking both foster and adoptive “parents”.

Be sure that it is the right time and situation before taking on such a responsibility. Do not let your heart override your head.

You need to engage both your heart and your head when making this serious decision.

Thanks to our colleagues at Dodo.