You are likely to have seen the recent news about a military K-9 hero pursuing the ISIS leader, Al-Baghdadi, to his self-imposed death in an underground tunnel. However, you may have missed these stories where K-9 heroes on American soil rescued two children.

Bandit is the first of the two K-9 heroes on American soil that we are highlighting today. Thanks to Bandit, the family of a three-year-old boy is safe and sound in the loving arms of his family.

In early October, the Shelby County, Ohio’s Sherriff’s Office responded to the desperate plea from the parents of a missing three-year-old boy. Deputy Frank Bleigh, along with Bandit, his K-9 partner, rapidly responded to the home of the missing child.

From The Start of the Search to the Successful Conclusion Only Took 10 Minutes!

Bleigh and Bandit began their search immediately upon reaching the home. Bandit quickly caught the scent of the child at the front of their home, and he never lost the trail. It did not take a full 10 minutes for the duo to locate the boy! The search had barely started, and it was over, with positive results.

The sheriff’s office posted on Facebook that this kind of result is precisely the reason they have K-9 units. Apparently, just watching Bandit, you could see that he immediately recognized the scent of the child. Once Bandit caught the scent, he was off and running. He did not slow down until he found the child.

Everyone in the Community Rejoiced!

The family, the Sheriff, and the community were so thankful to have the team of Deputy Bleigh and Bandit come to the child’s rescue. It seemed they could not thank them enough. Knowing that the outcome could have been a negative one, who could blame them!

Returning a three-year-old boy to his terrified parents unharmed had to make Deputy Bleigh feel pretty good. Doing it in such a short amount of time probably felt even better! I hope he enjoyed the appreciation of the community for a long time. He deserved it.

So did Bandit. Although the human handler plays a significant role in such a search, the dog actually does the work of finding the missing person. A K-9 team is a well-oiled unit that trains and works together, each doing their part. Not all communities have a K-9 Search and Rescue Team. It is hoped that more communities will be able to find funding for them in the future.

Pace, A Pensacola Suburb Also Had A K-9 Hero on American Soil 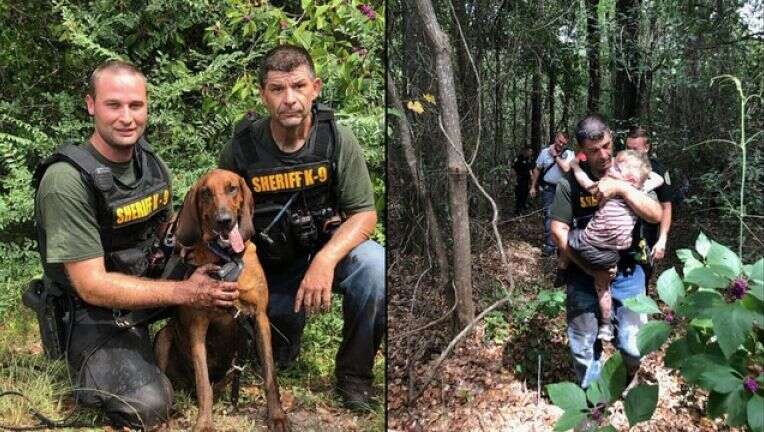 While many of the K-9 heroes we hear about are either German Shepherds or Belgian Malinois, the hero in this story is a Bloodhound. (Be sure to read the story of how a military K-9 pursued Al-Baghdadi, the leader of ISIS, to his self-imposed death in an underground tunnel.) https://excellentdogsclub.com/k-9-hero-of-the-al-baghdadi-raid/?fbclid=IwAR2ZrKSKEiltprty5bwmhY2cd8eV0p5LPWdXAL2-6V9prv1Q58IJmxaP2Yk

You may also want to read about the K-9 hero who tracked down Osama bin Laden at https://happymutt.org/past-and-present-k-9-heroes/?fbclid=IwAR3-ri7aauCfAQOqXU4lq27-3LzhU9eC1SuzcYINs5TsspWFv2jxPXBuKB4

As the Miami Herald tells the story, the boy’s grandmother was the one watching the three-year-old when he went missing. It was on a September Sunday. The grandmother was in the ladies’ room when the child unlocked the deadbolt and escaped from the house unseen.

Audra Hughes, the boy’s mother, shared the soul-wrenching moment she received the call that her child was missing. She stated that the most horrifying words that a mother can hear are that your child has gone missing, and you must get home immediately.

How the Search Unfolded

Upon escaping the house undetected, the autistic boy wandered over into a neighbor’s yard and off into the woods nearby. They live in Pace, Florida, which is a suburb of Pensacola and located in the Florida Panhandle.

Deputies from the Santa Rosa County Sheriff’s Office began an immediate search of the nearby woods. After an intensive two-hour search of the area, the deputies came up empty-handed. At this point, the decision to call in the K-9 search team was made.

Less than 30 minutes after the deputies released the bloodhound and given the command to search, the three-year-old autistic boy was found. The sheriff proudly reported that once the blood-hound was on the trail, it only took 28 minutes for the child to be located.

How The Search Ended

Surrounded by briars and covered in mud, Aedric was located approximately 200 yards away. The foliage was so thick that a machete was needed for the deputies to be able to reach him. Thankfully, other than having a few bug bites and scratches, the child was unharmed.

The area’s Commissioner, Sam Parker, took to social media to congratulate the heroic and hard-working team on rescuing the young child. The rescue team consisted of both human and K-9 heroes. Congratulations to them for their dedication to the training and use of a K-9 Search and Rescue Team. Hopefully, more communities will follow suit and do the same.