This breed is generally healthy. Huskies have an average lifespan of 14 years. All you need to give them is love, adequate mental stimulation, daily exercise, and a proper diet for them to have long and happy lives. As with all breeds, there is an underlying tendency for one or more serious medical conditions. This article will discuss breeding Huskies and four health concerns to which they are susceptible.

Reputable breeders will not knowingly breed animals carrying a serious disease. If they are aware of a dog having such a disease or carrying the gene to pass on to their puppies, they will neuter the animal.

We will discuss four diseases fairly common to this breed. You want to be sure that any Husky you may wish to own is free of these diseases. This is especially true if you may wish to breed this dog later on down the road. 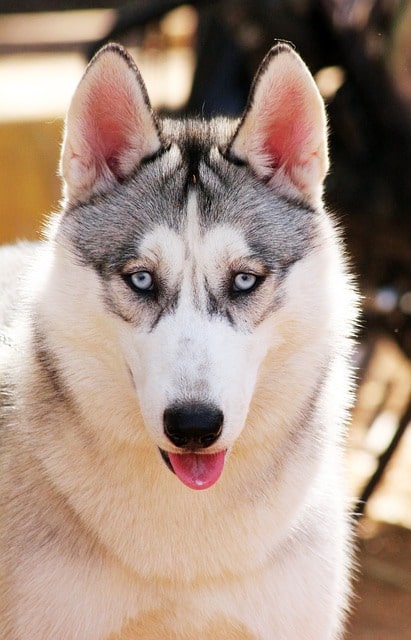 Siberian Huskies have a significant chance of developing a medical condition known as idiopathic epilepsy. This illness most often manifests itself when the dog is between the ages of 6 months and 3 years.

Dogs afflicted with idiopathic epilepsy have frequent seizures. This would make the dog suddenly stop moving while appearing to stare into space. It may also begin to drool and to have twitching in its muscles and limbs.

Such dogs usually require lifelong medication to control the seizures. It is obviously very important to avoid breeding dogs with idiopathic epilepsy.

Problems With Their Eyes

Some of the genetic eye conditions that are seen in this breed include progressive retinal atrophy, juvenile cataracts, and corneal dystrophy.  None of these ailments are connected to the dog’s often unique eye color.

In the case of cataracts, the condition eventually obscures the dog’s vision. This visual loss increases gradually over a period of time. If there’s no medical intervention, the problem is likely to lead to blindness. A dog with cataracts should not be bred.

The condition known as corneal dystrophy involves lipids which initially form and then collect on the surface of the cornea. There are 3 types and they include: epithelial, endothelial, and stroma.

These conditions begin at as early an age as six months. It is important to keep in mind that the female of the breed has a higher chance of developing this problem than does its male counterpart.

The genetic pattern for this ailment is known to be recessive in nature. Unfortunately, there is no quick and easy way to test for this condition. Statistical evidence shows that the prevalence of this disease stands at 4% of this breed‘s population.

Another genetic eye condition is known as progressive retinal atrophy (PRA). This disease is actually linked to a recessive gene that is found in most breeds.

The genetic variant found in the Husky breed is deemed to be a condition that is X-linked. It destroys the dog’s retina and ultimately causes blindness. Unfortunately, there’s no known cure for this destructive eye condition.

The other rare eye condition that plagues this breed is known as Uveodermatologic syndrome. This visual problem is deemed to be a type of autoimmune disease that’s triggered by viruses. Unfortunately, the virus attacks both the nervous system and the eyes of the dog. It can also result in blindness.

When a puppy is born with laryngeal paralysis, it will likely display a lack of vigor as compared to other puppies in his litter. This paralysis causes the muscles which support the  dog’s voice box to weaken and collapse.

Some of the obvious symptoms include coughing and breathing issues. It is generally more prevalent in mature dogs. However, for the Siberian Husky, it can also occur in very young puppies as well.

This is another genetic condition that develops in Huskies. The affected dogs have defects in their lysosomal storage. This results in the dog having a carbohydrate metabolism that does not function correctly.

Some of the symptoms associated with this illness are: lethargy, head shaking, a lack of coordination and seizures. There is no cure for this condition. However, there is a way to test for this illness. Gangliosidosis has been identified as another recessive gene condition known to be carried by this breed.

Just what does “Recessive genes” mean when talking about breeding Huskies and four health concerns?

The terms recessive and dominant are used to describe how certain physical traits are inherited. This helps breeders to know just how likely it is for certain traits to be passed on in a certain litter of puppies.

If you perform a basic online search you will find many charts, pictures, and explanations explaining these patterns.

Recessive Genes Can Hide A Trait

You do not have to be able to understand genetics to know that dogs carrying the genes to cause a serious disease do not need to reproduce. That is the bottom line.

Avoid causing major health problems such as epilepsy and blindness by not breeding dogs with any chance of passing them on. Easy enough to do.

These Health Concerns Cane Be Costly

So, even if you do not plan on breeding your Husky, you need to be prepared to deal with an inherited disease. Here is a good article for all dog owners to read. It deals with the costs of owning a dog including how to pay for expensive medical problems. https://happymutt.org/can-you-afford-to-own-a-dog/