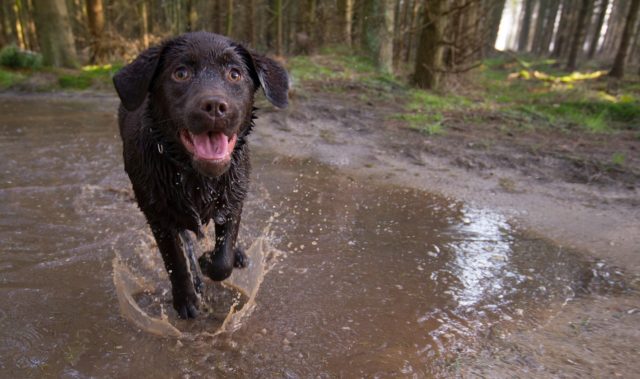 We love stories about rescued dogs who in turn, rescue people. We’re not sure if it’s karma working in the shadows or guardian angels giving people their due. Whatever it is, it’s amazing, and we can’t get enough of these kinds of stories. When we see titles like Rescued Pup Finds Missing Woman, it warms our hearts.

Roxanne, a Labrador and hound mix is one of those pups who have this kind of story. She was rescued as a stray and was subsequently adopted by Rebecca Burley. All Rebecca wanted when she adopted Roxanne, was a best friend. Little did she know that she was rescuing a hero, who would soon save a human life.

Just How Did A Rescued Pup Find The Missing Woman

One day, Rebecca took Roxanne out for their walk. It wasn’t long before they saw a Suffolk police cruiser rolling by. The officers stopped alongside them to ask some questions. They asked Rebecca if she had seen a woman in a nightgown walking around the neighborhood.

She told them that she hadn’t seen anyone fitting that description. However, she promised to keep an eye out for someone like that. She wasn’t really expecting to find the woman they were looking for. It was a very good thing she had Roxanne with her that day. Remember, Roxanne is part hound, so she has the sniffing and tracking skills in her DNA.

Five minutes later into their walk, Roxanne sensed something, or rather, someone. She started leading Rebecca towards the ditch beside them. And, when they went down there, they found a woman lying on the ground in her nightgown. Rebecca called for help from one of the nearby houses right away.

Emergency services arrived at the scene and gave the woman needed medical attention. Their neighborhood is hailing Roxanne as a hero for finding the woman and saving her life. Hopefully, her story will encourage people to continue to adopt rescue dogs because we never know what they can achieve.

This rescued pup finds missing woman without any training. Her DNA and loving heart led to a woman in distress being found and to receiving the medical help she needed.