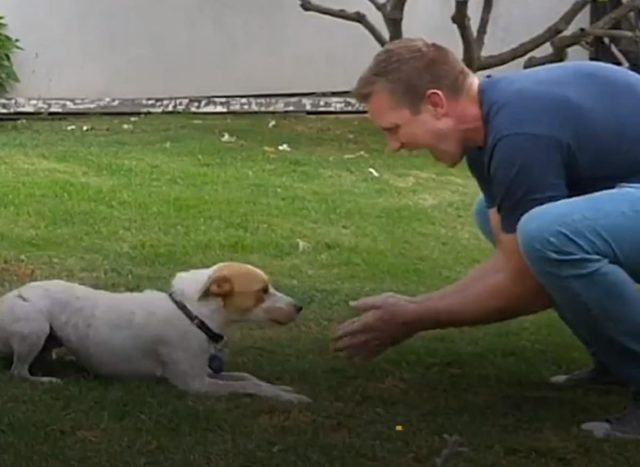 Who is Rocky Kanaka and Why Do We Care?

Rocky Kanaka is an American actor and TV host whose mission is to rescue neglected dogs and help them find a forever home. But in this instance, the actor won the heart of a feral dog before he could be adoptable.

No matter how unadoptable a canine may appear to be, Rocky believes that they deserve a forever home. And, with patience and dedication, they can be transformed into the sweet and loving creatures that they created to be.

Who Is Homer and Why Do We Care?

Take Homer here, for instance. When Rocky first met this feral dog, it seemed impossible for anyone to come near him. But today, Homer is waiting and ready to be with his new forever family.

Homer lived a life on the streets before he came to Camp Golden Years. When he was found, a leash was wrapped tightly on his waist. Rescuers believed that the poor pup had been tethered for a very long time. Apparently, Homer only managed to escape with the chain still wrapped around him.

Is Homer a Feral Dog?

Because he has been on his own for quite some time already, re-homing Homer became almost impossible. It’s as if he has gone back to being a wild, regressive animal. And that’s when Rocky stepped in.

Feral dogs have little to no human interaction. Approaching them may not be a good idea because they could snap the moment you come near them. But Rocky was patient. He sat down on the grass with Homer for about an hour until he was allowed to pet him.

From that point, Rocky decided to foster Homer. He knew it wouldn’t be easy, but it would all be worthwhile.

Almost everything terrified Homer. Rocky had to carry him in and out for his bathroom needs. He also had no idea how to use the stairs.

Then, one morning, Rocky got a huge surprise. When he stepped out of the house, something bumped him. He turned around and realized it was Homer. And that was the very first time he saw the pup’s tail wagging. Finally, this actor won the heart of a feral dog.

It took 2 ½ months before Homer’s tail started wagging. Nevertheless, it’s a one-of-a kind experience that Rocky will never forget. “He is ready to find his forever lucky family,” he said.

Homeless dog's reaction to seeing the ocean for the first time is amazing!

Wait until you see how this homeless dog reacts to the ocean when his leash is taken off for the first time.Homer is now avilable for adoption from Camp Golden Years