Social media has been a channel for many people to climb their way to fame and more than one strange-looking dog becomes famous because of it. Just one post, video, or image could reward you with instant fame.

This particular strange-looking dog becomes famous on the internet because of hematochromia. Do you know what that is?

There are plenty of famous dogs on the internet, thanks to the funny or silly things they do. But for the dog in our story, he is famous not because of what he does. It is only because he has a peculiar feature.

Thanks to his owner, the dog’s photo made its way onto social media. His photo has been “shared” and “liked” many times on Facebook. 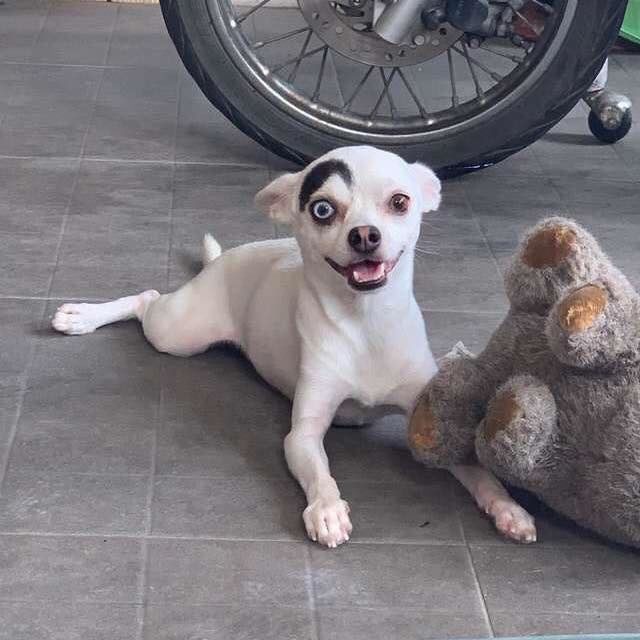 This dog is known as Lucky and he has a very peculiar eyebrow. While most dogs have eyebrows that are similar to each other, Lucky’s eyebrows are not.

The right eyebrow is actually positioned as if Lucky was thinking – with one part of it going upwards. Hmmmm. Aside from this peculiar eyebrow feature, Lucky’s eyes are also different from most dogs.

In fact, we believe that Lucky is surely one special dog. See, one of his eyes is colored brown. The other eye is colored blue. This is called hematochromia and is found in many species, including in humans.

In animals, is often associated with certain coat colors and patterns. Occasionally, those with hematochromia have vision difficulties or might also be deaf.

Charice Fra Cha adopted Lucky not too long ago. One day, while she was browsing through Facebook, she saw a post about a dog that was up for adoption.

That dog was Lucky. She did not have any dogs at that time but had been thinking about getting one. Charice felt that simply seeing Lucky’s photo was a sign that she should adopt him.

She fell in love with Lucky, based on the photo. So, she didn’t hesitate in the least. She quickly sent a message to the person who had posted Lucky’s photo and told him that she wanted to adopt the dog.

Lucky’s popularity makes Charice very happy. That is why she has created a page just for Lucky and regularly posts his photos.

She believes that sharing those photos gives others the same joy that she gets from seeing Lucky.

For television buffs, what famous English actress who played a doctor in the old west also had hemachromatosis? Jane Seymour.