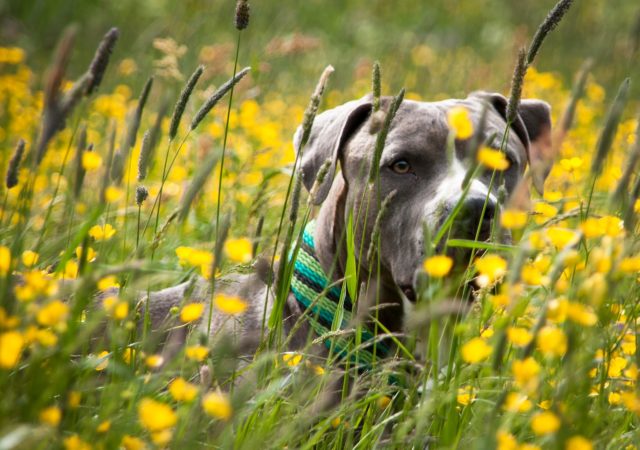 This once sad dog from a loveless home now loves a sad little girl. Maisy is a sweet Pit Bull with a beautiful soul. But, her beginnings were very rough.

She was abused and neglected by her original owners. She never knew what love was until she moved into her new home. Thankfully, things have changed.

For years, Maisy was restrained in a kennel in a lonely backyard. She was only kept for breeding purposes. They wanted puppies to sell.

Her keepers never took the time to show her love or to interact with her. They barely took care of her. The only time she got attention from them was during her breeding season.

She Truly Was a Dog in a Loveless Home.

No matter how many times they attempted to breed Maisy, she did never conceived. They believed that it would be a waste of money, time, and effort to continue keeping her.

Her breeders were convinced that no one would take Maisy. They thought she was ugly and that her body was too fat for anyone to take her off their hands.

So, the breeders decided to dispose of her. Fortunately, a friend of the breeder found out about their plans and suggested an alternative to them.

The breeders were convinced to surrender Maisy to people who would take better care of her.

It was at this time that Marisa found her. Maisy’s arrival was perfect timing. This was a very sad and dark time for Marisa and her family.

Not long after her father’s recent death, they also lost the family dog. The little girl was incredibly sad and her canine companion was no longer there to comfort her.

Indeed, it was a hard time for both Marisa and her family. As it turns out, Maisy was the perfect healing balm for the family’s aching hearts.

Also, Maisy’s heart was healed as well. After years of being totally ignored, she finally had a family who loved her and treated her well.

Maisy’s happiness over being adopted by Marisa and her family was evident for all to see and to hear.

When Maisy gets excited, she makes a very distinctive “wooing” sound. There is no doubt in anyone’s mind that Maisy is shouting her joy to the rooftops.

Maisy enjoys playing with the toys Marisa gave her almost as much as the attention she never received from her previous family. No doubt about it, Maisy must sense that she has finally found her forever home.

Immediately, Maisy became friends with Marisa’s horses and her cat, Motor. She even hangs out in the stables where she prefers to take her naps. Since Maisy became a member of Marisa’s family, everything became brighter.

She brings joy to the family, and Marisa’s life now has no room for sadness because of Maisy. All because a dog from a loveless home now loves a sad little girl