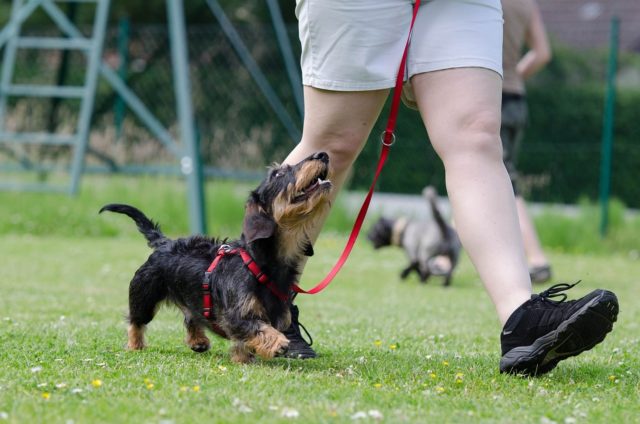 The dog who was given a week to live proved everybody wrong in a very short period of time. Noodles has always been a happy go lucky puppy. He is loved by all, and he loves his life with his family. Noodles is his mother’s shadow, as he is always with her.

The devoted pup goes with her to work, doing errands, and even when she goes out for dinner. Noodles is there with her.

Noodles’ Mom Was First to Notice That Something Was Wrong

Because they spend so much time together, Noodles’ mom knows if something is off. She will notice if something is wrong. There was a moment that she saw Noodles was not his usual self.

Noodles did not feel like playing and only wanted to lie down. He also somehow kept falling on his own two feet.

They brought him to the vet, and Noodles was diagnosed with hydrocephalus. This means that he has extra fluid in his brain.

Then, the Bad News

The vet told them that Noodles only had about a week to live with his condition. Noodles’ entire family was heart-broken because they thought that they only had a week left to spend with him.

A few days after his diagnosis, the doctor found out that Noodles was a good candidate for surgery. They would put a shunt on his brain so that they can drain the extra fluid.

When they came to visit Noodles in the clinic, he was lifeless. Noodles had become septic, meaning that the infection was very serious and had spread throughout his body. They did not know if he will pull through to the next day.

The family wanted to give Noodles a chance so the vet gave him another day. They all waited to see if there was any improvement in his condition.

That was all it took. Noodles only needed a day to show them that he was a fighter, and he wanted so much to stay alive. The determined pup slowly became more active and started to be himself again.

Noodles Continued to Beat the Odds!

Noodles had two more surgeries, and he has thrived through them all. He is now back to his happy go lucky self. People who will see him would never know that he went through so much in just a short time.

This dog is truly inspirational. His spirit and will to fight is so strong. He survived multiple surgeries, and he proved everybody wrong. Because of his family’s refusal to give up, it gave him the strength to push forward and survive.

What If It Was Your Dog Who Was Given A Week to Live?

Could you afford the massive medical bills that go along with serious medical problems? Whether two-legged or four-legged, our medical bills can wipe out our bank accounts pretty fast. Here is a good article for all dog owners to read. (It is from our sister-site) and has great advice on how to deal with such situations.  https://happymutt.org/can-you-afford-to-own-a-dog/