It’s not only Joe Biden who would live in the White House if Biden is successful in his bid for the Presidency. His two German shepherds, named Major and Champ, would be marching their way to Washington DC as First Pets.

President Donald Trump didn’t have pets during his first term as commander in chief of the United States. The pitter-pat of little feet in the White House has been provided by his lovable grandchildren.

So this means that, if Joe Biden is able to garner enough votes to win the Presidency,  the White House will hear the footsteps of First Pets once more.

How Major and Champ Joined the Biden Family

The hope-to-be first family owns Champ, who was acquired in 2008 from a breeder, and Major, whom they adopted from a shelter in 2018. The Bidens received flak when they purchased Champ from a high-volume commercial breeder,

There were many who claimed that this breeder was an unethical puppy mill. So when they adopted Major, they trod a different path and adopted him from the Delaware Humane Association.

When Major was a puppy, he and his siblings were in a poor state of health when they were turned over to the shelter. He was taken in by the Bidens as a foster puppy.

After a trial period, they eventually decided to give him a permanent home. Major’s littermates were also able to find loving homes.

Champ and Major are frequent stars on social media platforms, especially Jill Biden’s. She enjoys showing off their fur babies every chance she gets. Aren’t they gorgeous?

Who Was the First Rescue Dog to Step Foot Inside the White House?

Major is often described as the ‘first rescue dog’ to ever step foot inside the White House. However, this isn’t really true. In addition to visitors, there have been previous rescued “First Pets” who actually lived in the White House as members of the First Family.

Lyndon B. Johnson, the country’s 36th president, owned a dog called Yuki. His daughter found the dog during Thanksgiving at a gas station in 1966. His grandson, Lyndon Nugent, wrote that the white mutt was LBJ’s favorite dog. Her name was “Yuki”, Japanese for snow.

According to Nugent, they shared a special bond that embodied the American spirit: that it was only in America where a poor boy from Johnson City ends up in the White House.

The White House has had several famous presidential pets who have humble origins throughout the years. This includes Socks, the Clinton’s black and white stray cat from Arkansas who jumped into Chelsea Clinton’s arms claiming her as his “human”. 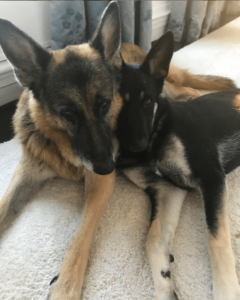 One thing’s for sure, though. Major and Champ are gorgeous dogs and they don’t see to mind all the photoshoots designed to show them off. Who would not want to show off such beautiful dogs?

Major and Champ aren’t politicians and regardless of the color of the house in which they live, we are happy they have a happy home. We hope many more rescued dogs are as lucky as them and soon have loving homes as well.

UPDATE ON CHAMP AND MAJOR

Unfortunately, things have not worked out well for these two gorgeous dogs. First, one was in the news for tripping Joe Biden when he tried to play with him immediately after leaving the shower. (Not something I want to visualize!).

Also, very recently, the two dogs were sent back to the family home and will not be allowed to live in the White House until “they can behave”. Evidently, at least one of them became too agressive with the Secret Service agents and others serving in the White House.

Reportedly, one of them actually bit at least one person. Several people complained about being afraid of them. I will not name the one accused of biting or for being the more aggressive of the two. Innocent until proven guilty is my mantra.