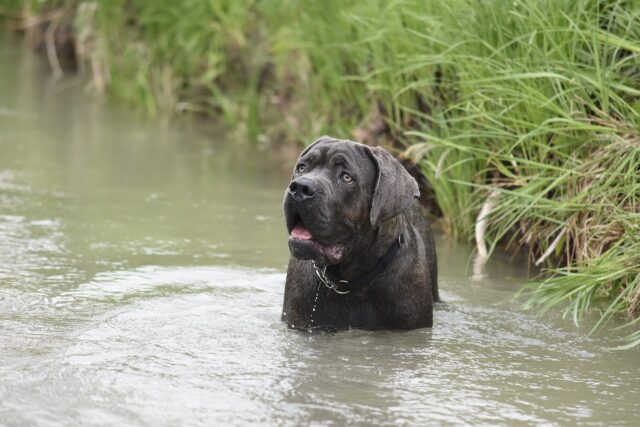 You will NOT believe the lesson this man had to learn and who had to teach it to him! In a family setting, every adult member must have a say when adopting a dog.

If only one person decides to adopt a dog without considering the feelings of others, it can lead to frustrating dynamics. Dog trainer Victoria Stilwell recalls working on a case like this.

Victoria visited Chad and Melissa, a couple with a very young child. They owned three huge mastiffs, but it was basically Chad’s idea to get each of them.

Melissa had little, if any, say so and was surprised to come home and find more dogs in the house than when she had left. And, now, Chad was talking about getting a fourth Mastiff.

Every time someone comes to their door, one of the Mastiffs rushes to the door, barking loudly and slobbering all over the guests. He becomes more anxious when the guest actually interacts with him and urinates all over the floor.

Chad and Melissa have a toddler so this is both a fall risk and unhygienic, not to mention embarrassing to Melissa, especially. If you have a dog who urinates when anxious, read this: https://excellentdogsclub.com/how-to-help-your-dog-deal-with-their-separation-anxiety/

The Lesson This Man Had To Learn

Each time, Chad makes his wife clean up after the dogs’ mess. Victoria was absolutely infuriated with what she saw. The trainer gave Chad a stern lecture about what it means to adopt a dog and how wrong he is to disregard his wife and her opinion.

Victoria actually told Chad that if he were her husband, he would be out of there! She sounded quite serious about this, too. After the lecture, Victoria began training one of the mastiffs named Roman.

The trainer demonstrated how to use body blocking techniques. Then, Victoria made Roman stay in place while she opened the front door, demonstrating proper technique. Victoria invited a guest tasked to ring the doorbell, testing Roman even further.

During that time, Chad was instructed to have Roman “stay”. It took a while to get the job done because Chad confused the dog by talking too much. Victoria told Chad to use simple words and to focus on body blocking.

She explained to Chad and Melissa that they should not talk to the dog like he was a human. Using too many words for Roman to understand made him even more anxious as tried to figure out what Chad wanted him to do.

Dealing With Roman’s Fear of Water

The trainer also addressed Roman’s fear of water. Victoria took some grooming gloves and stroked the dog while wearing them. Then she dipped the gloves in warm water and stroked Roman again.

It was a method of helping the dog get used to the wet feeling. It did not take long for Roman to begin to relax and enjoy the process.

Chad followed what Victoria had demonstrated with the glove and water technique. Before long, Roman allowed the bucket of water to be situated near him without running away from it.

All in all, the training sessions with Roman went well. However, Victoria was concerned about whether or not Chad had learned his lesson, especially the ones dealing with how to treat his wife. Will he continue after she leaves. or not?

Did The Lesson This Man Had To Learn Stick With Him?

Victoria checked the couple’s progress a few weeks later via a telephone call. Chad was doing his fair share of work taking care of the dogs and there had been significant improvement in both Chad’s and Roman’s behavior.

The trainer was happy that her words got through to him. After all, she is a dog trainer, not a marriage counselor.

Video courtesy of It’s Me or The Dog via YouTube.

Abandoned Cheetah Cub Was Befriended By A Dog