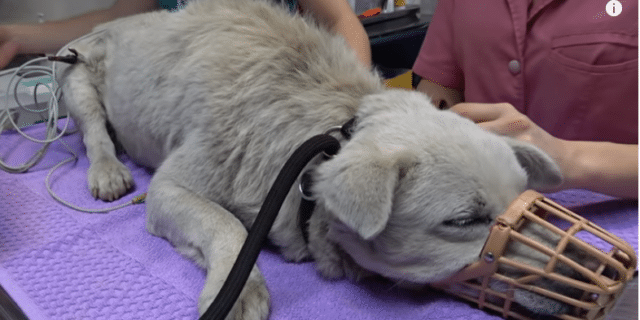 A heartbroken dog rescued from the cold streets of Romania has caught the eyes and hearts of many people. A scared, homeless dog named Bobi was found wandering near a railroad station during a bitter winter.

Romania-based rescuers showed up to save the dog from the cold streets. However, they soon realized that it was very dangerous and risky to approach the dog.

He was so frightened that he kept running away whenever they came near him. A scared dog can also be a scary dog. If a frightened dog gets cornered, he may come out fighting and injure those trying to help him.

They were concerned that he might be hit by a train but feared for their own safety as well. Nonetheless, they tried their best to redirect Bobi to a safer location. They wanted him well away from the train tracks.

Eventually, the dog became too exhausted and hungry to keep on evading them. Or, maybe he just realized that the rescuers were only trying to help him.

Finally, Bobi approached them. By this time, he appeared to want to taste their yummy treats. Their attempt to entice him with food had worked. There was no telling how long it had been since Bobi had eaten.

They also noticed that the cold and hungry dog was injured. Bobi was obviously limping and there was a scar near his left eye. The eye had obviously been seriously injured.

After he finally finished eating all the food they offered to him, Bobi allowed them to carefully put a leash on him. They proceeded to take him to a veterinary clinic for medical care and close examination.

At the vet clinic, the rescuers were surprised to learn that Bobi had a microchip and that he wasn’t a stray dog. Their initial excitement over this wonderful news did not last long. Sadly, a happy reunion between Bobi and his owner wasn’t possible because he didn’t want the dog back. Instead, he told them to just keep Bobi.

The rescuers were very shocked to find out that the dog had been roaming about 10 miles from his previous home. They were saddened to learn that the 9-year-old dog was blind in his left eye. It would have been very hard for this old and partially blind dog to survive on the street alone during the long, cold winter.

What Does the Future Hold for Bobi?

Although Bobi is a senior dog, he is playful and has loads of energy. He’s also loving, obedient and gentle.  The rescuers have taught him how to walk on a leash. He is finally enjoying his life instead of having to fend for himself and wondering when he would get another bite to eat.

Bobi is now approaching his golden years. He needs a family that can take care of him and one that offers him a home in which he can stay forever. He definitely needs somewhere he can spend the rest of his years being loved and happy.

At the moment, he’s under the care of Howl Of A Dog in Romania. Anybody can adopt the dog since he can be adopted internationally. Bobi is ready and safe to travel to Canada, USA or anywhere in Europe to find a forever home.

What a wonderful story some lucky family will have to share with their friends and family. Can you imagine the community excitement of having an international canine celebrity in their neighborhood? Not many people have the opportunity to share their home and heart with a dog who has crossed the ocean to be with them.

Sadly, Bobi is Not the Only Dog in Need

Keep in mind, however, that there are thousands of dogs needing a loving home all across our great country. Remember that, wherever you live, there is a dog waiting to be rescued by a loving family.

Undernourished and Scared Dog Is Rescued