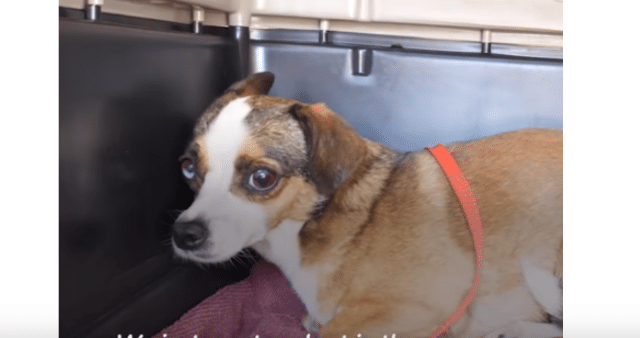 Scared Dog Had Never Wagged Her Tail is a video we all need to see. It demonstrates how love and compassion can overcome paralyzing fear.

The video kicks off with Rocky pulling up a little bed only to find Blossom, a small dog, running out of it. Blossom seemed to be completely terrified by everything.

Rocky gently lifts the little dog, puts her in a crate and takes her home with him where she will live with 150 other rescued dogs.

The two were together in a garage for several minutes getting to know one another. Suddenly, Blossom started shaking violently for no apparent reason. She had no idea how to act or behave like other dogs.

Although Rocky was a seasoned rescuer, this was shocking to him. Nothing in his rescuing experience had prepared him to deal with a dog like this.

Blossom didn’t know how to act like a normal dog. Every situation seemed to be the first time she had experienced it. She was in a constant state of fear.

Blossom was terrified when she first stepped on the grass. She even seemed scared of something as simple as sunlight. Whenever Rocky looked directly at her, she ran away to avoid eye contact.

Moreover, Blossom would sit in a corner or hide under the table for several days. The only time she would come out was when someone would take her to the bathroom.

Rocky did everything he could to help her become less shy. Instead of removing her from her usual hiding spot, Rocky removed the hiding table and built her a little bedroom. From this point on, a lot of progress was seen.

First, Blossom began to allow hand-feeding. Her extreme timidity had kept her from taking food directly from someone’s hand.

After seeing other foster dogs drink water directly from a bowl, she also started to drink from it. This is something she had never done before. When she came back the second time to sip from the bowl, Rocky was extremely fascinated by her actions.

He congratulated her although he maintained his cool to avoid making her shy. This took place after about six weeks after he brought her to the house.

6 Weeks Later, the Huge Step That Changed Her Life Forever

This was definitely a huge step in her life. It was a real turning point for Blossom. Two months later, out of nowhere, Blossom jumped on to the couch and sat down next to Rocky.

Afterward, she would rush to greet other rescue dogs whenever they entered the house because she was so happy to interact with them. Her interactions with both humans and other dogs had significantly improved.

Then on one absolutely amazing day, Blossom did the most beautiful thing! All of a sudden, she went outside and started running around.

Blossom then began wagging her small tail for the first time ever. With the sunshine of love, frequent feedings of attention and with some time to grow, this little dog has finally “Blossom-ed” into a happy little flower.

Incredibly, with love, patience and a little bit of time, this 3-year-old dog overcame her incapacitating fear. Blossom is now ready for her very own family to love. Amazing, isn’t it?