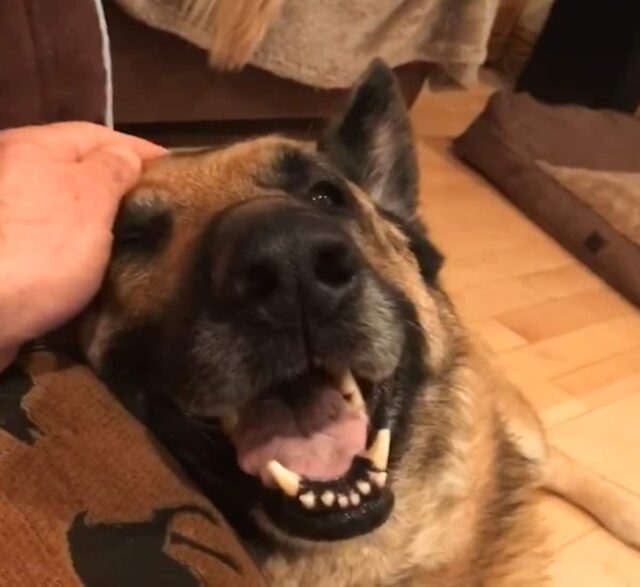 The story of how a chubby dog lost over 50 pounds is an interesting one. Just like with people, dogs gain weight over a period of time, not overnight.  And, also like with people, the weight is not easy to lose.

The reasons for gaining or losing weight by people and dogs are very similar. However, dogs have little choice in the matter. They are at the mercy of their owners when it comes to what and how much they eat.

How It All Started For Tony

Tony was a beautiful German Shepherd found wandering around on his own. Concerned dog-lovers in the community were worried about Tony. They decided to surrender him to a local shelter.

The Sacramento Society for the Prevention of Cruelty to Animals accepted Tony. He was eventually adopted by a family. However, it was not a good home for Tony, so he was returned shortly after.

Tony was left outside all day, every day. When he was returned to the shelter, he was unhealthier than he was before he was adopted. It saddened the shelter workers to see Tony’s condition.

The Beginning of the Healing Process

There is no denying that Lee Asher is a dog lover. He frequently stopped by the SPCA to visit with the dogs being cared for there. He vividly recalls when he first saw Tony.

On that fateful day, Lee immediately envisioned Tony at his best. Instead of visualizing the chubby German Shepherd, he could see Tony in a sleek and healthy condition.

The details of how a chubby dog lost over 50 pounds

Lee had a lot of experience around dogs. He knew that Tony mostly needed love, time, and understanding. Lee also knew that Tony would need some time to adjust to life as a member of a family.

However, Lee was surprised to see Tony hanging out with his other dogs in less than a week. Tony was already coming out of his shell.

Lee shared that he had to reprimand Tony a little bit for chewing on a brand new piece of furniture. This activity may have been a sign of Tony’s anxiety over being the new dog in the family.

Lee was aware that Tony needed a loving family. He also needed a pack that would not give up on him, unlike his previous owners. They had heartlessly left him alone outside every day.

Tony, Lee and the other dogs go outside every day to run around and play. This is a new thing for Tony and Lee knew that Tony was not used to having a playtime.

Lee noticed that Tony did his best to keep up with the pack as they ran around the yard. But, at first, he could not keep up no matter how hard he tried. This was sad to see.

Eventually, Tony could run a little bit faster. He ran longer before wearing out and needing to rest. He was not panting so hard when he played.

Next,  Lee noticed that Tony was slowly losing weight. He was thrilled to see the progress that the chubby dog was making with his weight loss every day.

Tony used to weigh almost 150 pounds. This was before Lee adopted the German Shepherd. Now, Tony has lost over 22 kilograms.

This weight loss occurred because Tony could finally run free. This freedom and the subsequent weight loss was all thanks to Lee.

If you are interested in dogs eating problems, read this: https://happymutt.org/this-pizza-obsessed-dog-needed-intervention/

What Types of CBD Are Available for Your Fur Babies